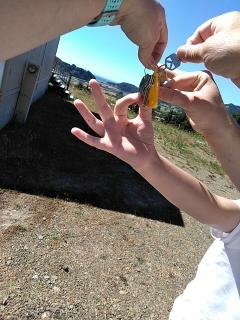 We packed up and moved the entire operation to Pistol River, Oregon from Coeur d’ Alene, Idaho at the end of June 2018. This is our adventure…

In April, we were hit with a second great loss, I lost my dad (and wonderful dog). No one saw the loss coming. In an instant life went from it’s normal level of stress to a volcanic eruption meets a Super Cell tornado. To quote the great Bugs Bunny, “That was a big boom there, Wiley.”

When life throws massive storms at you, you have two choices: either break in half, or adjust your sails. I choose the latter, having no idea what the future could hold. Over a week, we held each other in disbelief. We began to pray together again. We began to look for the good.

If it wasn’t for Nectar of Life and ginormous amounts of coffee, I am not sure I would have survived April. Coffee is life. Our oldest turned 15 in mid-April. The next day, after almost a year of trying to sell our house, the new owners fell in love with the place, but there was a catch.

If you know me at all, “there was a catch” is a frequent statement.

In this case, the catch was that we only had ten days to move out of the house. To add to the plot, the coffee roaster (and my husband) got the worst stomach flu imaginable the following weekend. I was elated I didn’t actually die from the stress. I was taping boxes and bringing up cups of Gatorade like a crazy person.

Did I mention we didn’t have anywhere to move into?

No, I guess I didn’t. That’s because the house we had prayed about, dreamed of, and were a “bump-able” contract was sold to someone else. We were so lost. There is a Jerry Garcia song called “Limbo” that was too close to home. Mainly because, we had no home.

We moved into a long-term hotel room. We drove down to Oregon to look at other “options.” Not one house was “the one.” We found one, “that could do...” but the owner wanted 45 days after close to finish moving out. Live in a hotel for over 90 days? That is a big, fat NO.

I cried out to God. Literally. Ugly sobbed, with the most hopeless I have ever been. I was a mess. “God, where are you? What are we supposed to do? This place of limbo is too expensive. We can’t keep going like this!”

That night, we got a call from our Realtor. He asked if we were still interested in the original place we wanted. I said, “Don’t toy with my emotions!” The next day, we put in an offer. 48 hours later, it was accepted. We were going HOME.

The next six weeks were a delightful game of “hurry up and wait” for literally every step of the process. I sold “my” car in a sign of faith. I have a thing about my “own” vehicle. My car was “my freedom.” Selling it meant that I was “all in.” Then, at the end of June we were told we only had 2 days to get down to sign papers or we would lose the interest rate quote we got.

Moses might have parted the Red Sea, but he still had to cross that thing with women and children in tow… We did too. We packed, cleaned, moved, bled, sweat and prayed until we didn’t think we would make it. We shoved our car and two trucks full of (pretty much) everything we owned.

I was awake 42 of 48 hours by the time my head finally hit the pillow at that hotel in Brookings, Oregon. We’re not going to put pen to paper to announce the amount of caffeine we collectively consumed to make this happen, but rest assured, it was not the healthy, recommended dosage. I drove the 26 foot truck with all of our roasting equipment. Suffice to say, it was sketchy.

The highway along the Columbia River Gorge is a scary place in the dark of night. The near-full moon sent silver ripples of light across the water. The wind whipped the truck mercilessly. I drove with my hands tight against the wheel. When I would stop at the rest station (I think there are only two on that entire stretch), I had the imprint of the stitches on my palm.

After what seemed like an endless “home-stretch,” we made it. We held those keys knowing exactly the cost. We knew holding those keys had come at a great price for every single one of us. That picture will forever be etched into my mind.

Want to read the rest?